This time last year I thought there was no way 2011 could top 2010, what I called my best year ever. Well, it sure did! There were many great moments this year; both for Out With Dad and for myself professionally. Join me as I look back at an amazing year filled with many milestones:

February 1st was a big day. First, in the wee hours of the morning that day, Out With Dad was watched for the half-millionth time! 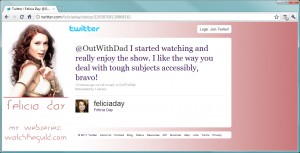 Later that day, late in the evening, a very exciting thing happened: Felicia Day tweeted about us. I’m a great admirer of her and what she’s done to foster my new favourite storytelling medium: web series. I can still remember that moment when I heard the notification chirp that there was an @OutWithDad mention on Twitter. For a moment I was confused by @feliciaday’s avatar sitting in the Out With Dad mentions column. That could only mean…? Sure enough, she did! I woke my wife to celebrate! 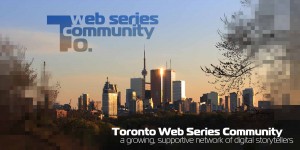 Perhaps the most prosperous event that happened this year was the birth of the Toronto Web Series Community. On February 9th we hosted the first bimonthly meetup. At this meet up I met dozens of talented web creators. There is a ton of great talent and energy here and around Toronto (including folks who joined us from Guelph and Montreal!).

Since this meetup, a lot of cross-pollination has happened. It was through these meetups that I met Bruce Harper, who would go on to become cinematographer on Out With Dad whenever scheduling allowed. Actors have crossed over too! Ashton Catherwood of Microwave Porn joined us, as one of Nathan’s colleagues, look for more of him later this season when we return. Best of all, the knowledge shared: we’ve built an amazing community this year of passionate filmmakers, directors, producers, actors and other crafts people who are all eager to share and learn from one another. I’ve made some amazing new friends.

Out With Dad nominees on our first red carpet.

Monday, February 21st Out With Dad was among the nominees at We Love Soap‘s Second Annual Independent Soap Awards. We were nominated for five awards, and won Out Standing Use of Music. This is the first award Out With Dad has ever been honoured with. We couldn’t have been more proud. It was also a pleasure to meet up with the makers of and the star of Anyone But Me. The highlight of the night: whenever Out With Dad’s name was called as a nominee, it was their row that clapped loudest, and when Anyone But Me was called, it was our row that clapped loudest. Be sure to read Kate’s blog about our group trip to New York City.

I got to fulfill a childhood dream of being a guest on a talk show on February 28th when Kate and I appeared on daytime Toronto interviewed by host Glenn Dixon.

In early March Kate and Will were guests on The Mike Chalut Show with Acey Rowe on PROUD FM. Click on the link to hear (and see!) them being interviewed by Mike. 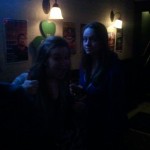 March 14th marked our television debut! At 11PM the first season of Out With Dad was broadcast as an hour long special. Our whole gang got together to celebrate at O’Grady’s Pub on Church. It’s a good thing there was no overtime in the Leaf’s game that night, because we switched over all the televisions in the bar to Rogers TV! One highlight of the night was a tweet from @klashton27 saying “Watching Out With Dad web series on Rogers Cable 10, wish they didn’t bleep it #internetwinsagain”. The Out With Dad team really knows how to party!

On March 21st, producer Eric Taylor and I met with the president and executive director of PFLAG Canada, whilst they were both in town. In that meeting they proposed a mutual promotion and support of on another. We committed to including a 20-30 second public service announcement for PFLAG Canada at the end of every second season episode. They offered to officially endorse us, with the hope it will not only legitimize Out With Dad, but also help us open more doors to potential funding and resources. Not only has PFLAG Canada members become good friends, I’ve learned a lot from them and can say my storytelling has benefited greatly. Thanks guys!

Out With Dad was accepted into the 2011 LA Web Series Festival. On the night of March 27th, at the awards celebration night Out With Dad was honoured with six awards. Unfortunately none of us could attend the event. Read about how we learned of our honours in this post.

Our nominations for the year wouldn’t end there! On April 12th Out With Dad was nominated for Best Online Film & Video Drama Series in the 15th Annual Webby Awards. We’re still in shock about his one! We didn’t win this award, but that’s okay. There is no way to express how true the expression “it’s honour to be nominated” feels. We lost to (did we really loose?) the BBC  production Eastenders E20. To think that we made something that stands up to a BBC production! And then to be reported about it by CBC.ca.

After hundreds of requests from fans asking when our second season would debut, we held sharing until our next viewership milestone. On May 2nd Out With Dad was reached one million views!

July 7th: the debut of season two! As with last year, I hosted a launch party at my home. We didn’t get to do the countdown to 8pm this year because it was still uploading! I think it was live only a few minutes late. Most of the cast and crew were present, as well members from the web series community. I couldn’t have been more proud to see everyone in the room with tears in their eyes as Rose came out to her father at dinner. Finally, the title of our show would come true: Rose is OUT with Dad. We then screened the next four episodes which were still rough cuts at the time.

A surreal experience for myself, I was interviewed for the Summer 2011 issue of Canadian Screenwriter. It was another one of those instances of fulfilling a childhood dream. When I was younger I would read magazines about filmmaking, gripped by the words of my heroes. It was bizarre to see my name and my words in print. 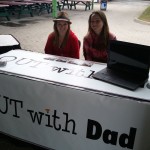 PFLAG Canada invited us to GAY DAY at Canada’s Wonderland, on August 21st. Kate, Lindsey and myself had a great time. We got to meet some fans in person – introduce the show to new audiences and hand out some t-shirts! Say, if if you got one of those red Out With Dad t-shirts, send us a picture of you wearing it! I’d love to post it on our Facebook page.

Sometime on the day August 27, our YouTube channel was watched for the two-millionth time.

This isn’t exactly a milestone, but worth mentioning – on a rather sad September 13th, we announced we’re going on hiatus. Fortunately you, our fans, have been very understanding and patient. For myself, it was a good move. While it is no question that of all my work Out With Dad is my first love, I had to focus on other priorities. Unfortunately I have many commitments and they became very demanding this fall. Among these other projects was a corporate video, starring Kate Conway! Doesn’t she look great in a suit?

October 30th, our first episode “Rose with Vanessa” was viewed for the millionth time.

November 3rd, we were on hand at the nextMEDIA 2011 “The List” announcement party, at which we were named among Canada’s digital elite and a 2011 nominee for the Digi Awards.

Throughout our hiatus I’ve had many opportunities to network and meet new people at industries events. On November 17th I was a co-panellist at the Children, Youth & Media Conference – this put Out With Dad on the radars of top Canadian children and youth television industry members. It was an exceptional learning and networking opportunity. As was the nextMEDIA conference, which happened on December 5th and 6th. At this conference, I participated in the Digital Launch Pad challenge; in which I pitched Out With Dad to an audience of full of advertisers, marketers, distributors and broadcasters. This helped me make fantastic connections which could lead to great things for Out With Dad in 2012.

November 20th, three million views on our YouTube channel! Bear in mind, there are more views than that – because we’re also available on Blip.TV and other platforms.

December 20th,  We Love Soaps announced the nominees for the 3rd annual Indie Soap Awards. Out With Dad is nominated for 7 awards including best drama! Kate, Will, Wendy and many others will be trekking south to New York City for the ceremony. I hope to make it too, it’ll be great to see the Anyone But Me gang in person again and make new acquaintances with the nominees of the other amazing indie soaps.

The next day, on December 21st marked another viewership milestone: it was the first half-million view month! In the 30-day period leading up to this day Out With Dad was watched 502,812 times on YouTube alone. Our rate of viewership continues to climb exponentially. It’s fun being able to say “Out With Dad is watched over half a million times per month”. I wonder how long before we’ll have our first one-million-month?

||What’s ahead for Out With Dad?|SmallType||| 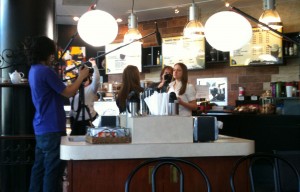 On set at Rose's favourite coffee shop, filming a scene for our season finale.

The biggest question on everyone’s minds is: WHEN IS THE NEXT EPISODE!?? I honestly don’t know. There are several remaining season two episodes filmed, plus bonus 3D minisodes. They are not yet edited. Here are my priorities before I can begin editing:

I hate to say it, but my corporate video work must take priority above these things. No one hates this more than I do! This is why we need fundraising for season three. With proper funding, Out With Dad can be the first priority for me and everyone involved. Season three can not be done for free.

Will there be a third season? There has to be! I’ve written many more seasons beyond season two; and we still haven’t gotten to my favourite scenes! Rose, Nathan, Vanessa and the rest of the gang have a lot fun and heartache ahead of them. Believe me when I tell you: season three of WILL KNOCK YOUR SOCKS OFF! So we’ve got to make this happen! With your help: I know we can!

Your love and support is what allows all this happen. We’ve had so many milestones this year, and I expect even more next year. Thank you everyone for making 2011, quite simply, THE BEST YEAR OF MY LIFE.