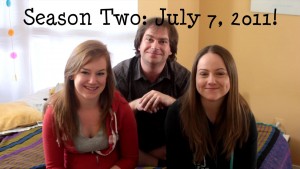 We did it! Thanks to you! Thank you for watching and sharing Out With Dad.

We promised we’d announce the release date of our second season once our YouTube channel hit 1 million views. We’re excited to say it happened last night!

While filming scenes for season two, we recored this message for you!

You heard it! Thursday, July 7th, 2011 – the one year anniversary of our first episode’s debut.

Thank you again to all for your support!