Being involved in Out With Dad is such a privilege. It’s the coolest thing I’ve ever been a part of. We all had faith that the show would be liked and that would allow us to do more episodes. Up until January of 2011, that’s all I was really focusing on.  Then I get the call… “We’re nominated for 5 awards at the Indie Soap Opera Awards!…..It’s in NYC!”.  Alright then! When do we leave? 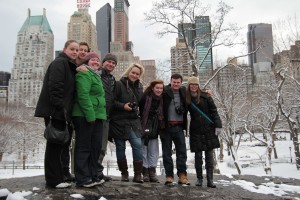 I have never been to NYC before and was really excited to go.  I love travelling and the fact that I get to go to a brand new place with some pretty awesome people was exhilarating. The few days I spent in NYC before the awards were brilliant. NYC is magical! I felt like I was cheating on Toronto with this really hot city. Basically, NYC has an ass that won’t quit. Sorry Toronto. I still love you!

The award show was held on Monday February 21st at a dance school in Midtown Manhattan. OWD proudly walked its first red carpet and answered questions from some interesting characters. Cisco, the diva with the large fan, was Lindsey’s favourite. If she could, she would box him up and mail him to her house.  I was really intimated and nervous. I don’t think I said much. 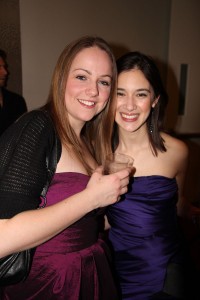 Kate meets her Anyone But Me counterpart, Rachael Hip-Flores.

But it was still really awesome. Then we got some pre-show wine compliments of the open wine bar. While standing in line waiting for my glass, I looked behind me to see Rachael Hip-Flores, the star of Anyone but Me. I awkwardly said hello and walked away. In case you didn’t know, I can be REALLY awkward around people I admire. Thanks to Jason (writer/director), ten minutes later I was properly introduced to Rachael and formally apologized for my awkwardness. She just happens to be the nicest person on the face of the earth (after the cast and crew of OWD of course), so she forgave me. We snapped a quick photo and then it was awards time.

The show itself went by pretty quickly.  Jason, Will (Dad) and I got to present outstanding editing.  Jason “directed” us to each read out one name at a time. I got to announce the winner, Wiley Abbas for In Between Men.

Of course awkward Kate pronounces his name incorrectly. Apparently my face turned the colour of my purple dress. My bad! I was really sad that Jason and Will didn’t win, but it was the biggest thrill to hear “Out With Dad” when they announced the winner for best use of music in a webseries. Damn straight we won! Adrian Ellis, the composer, will literally rock your socks off. You won’t find them for weeks, so says “goodbye socks”. The other artists who donated their awesome music were mentioned by Jason in his speech. We couldn’t have won without Late July, Lara Martin, Dan Beausoleil, and Trio Arjento. We are sooo lucky to have such great musical talent on this show. They absolutely deserve this award.

After the show was over, it was time for more wine and networking. I need to work on my networking skills. Jason, Lindsay (Vanessa), Will and Corey (Kenny) had no problem. We hit a couple of bars after that to celebrate the win. Corey continued to make friends wherever we went. It was quite entertaining to watch. I was just really happy to be in NYC celebrating an award for our little labour of love.

This show has already taken me places I never expected to go. I am so proud to say that Out With Dad is an award winning web series and I am lucky enough to be part of it. It could all end tomorrow and I’d be ok. Out With Dad brought me to the amazing city of New York and made my dreams even bigger. We have nowhere to go but up and I really look forward to the ride. Maybe next year, the Indie Soap Opera Awards will be held in Tokyo. What do you says guys? Get those passports ready!