Out With Dad wins big at LAweb Fest 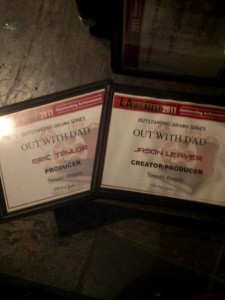 UPDATE: On March 29th, the festival officially announced all the award honours on their Facebook page. The list included many categories not presented on Sunday night, including Outstanding Cinematography in a Drama Series by Jason Leaver.

The awards ceremony took place late-night in LA, with the time difference it was in the wee-hours of the morning for the Toronto, Ontario based cast and crew. 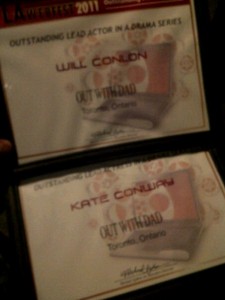 This means Conway and Conlon didn’t learn about their achievements until they woke up to find excited text messages from their director, who did stay up to learn the results of the festival. Conlon’s reaction on his Facebook was “I wish I was there! What a way to start a Monday morning! Thank you so much!” Conway said “Best wake-up call ever! This is the best Monday that ever Mondayed”, after being told by phone she’s now an award-winning actress. Leaver, still shocked in particular for his win of Outstanding Writer said this news is something “my 15 year old self wouldn’t have believed if I went back in time to tell him.” They are all overwhelmed by the support and congratulations from friends, fans and fellow web series creators. 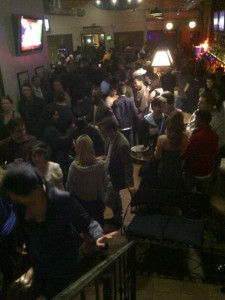 Information about these achievements came to us by way of Thomas Gofton and Tom Roper-Brown the co-directors and co-creators of Mind’s Eye, another Canadian made web series, who were present at the ceremony.  Gofton was posting info and photos throughout the night via Facebook and Twitter. Last night was a great night for them as well, as Gofton and Roper-Brown were awarded Outstanding Horror/Sci Fi/Fantasy series; and their composer Zeeke Hamilton won two awards: Outstanding Theme Song and Score in a Horror/Sci Fi/Fantasy series. Congratulations! And thank you for accepting Out With Dad’s awards on our behalf. We owe you a round drinks!

If you haven’t had the pleasure of watching Mind’s Eye The Series – you simply must, it’s truly magical.