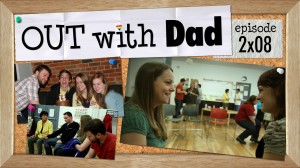 It’s intermission at the PFLAG sharing meeting, Claire makes a point of getting to know little more. After intermission, the groupÂ reconvenes to hear more stories, including Maureen and David’s (based on submitted text). At last, we get to hear from Rose and Nathan, typical of a sharing meeting: there are tears.

Voted #1 inÂ We Love Soap‘sÂ Indie Soap of the Week poll, for the week of April 1-7, 2012!Â Also in this poll, Rose & Claire were voted couple of the week, and both Will Conlon & Kate Conway were voted #1 Actor and Actress. Thank you everyone who voted!

For more information about PFLAG Canada, visit them online atÂ pflagcanada.ca. For links to similar organizations around the world, please visit this page.

Last week I had theÂ privilegeÂ of attending another PFLAG sharing meeting in Durham, I was accompanied by Will Conlon. We screened Part I and a rough cut of Part II. I was nervous showing my work to the real deal, not only the real group/organization, but the real Maureen was in the audience. I knew she we would be there, though when Will and I arrived we didn’t see her at first. We mingled a bit, caught up with Donna and Jayme. I didn’t see Maureen until after we pressed play. I was so nervous. Did I tell her story right? What about her son’s story? Had she heard his story before? I took several libertiesÂ with Maureen’s story when I was writing the screenplay, more than any of the others. Would she be okay with that? My hands were cold and clammy.

When I screen my work to an audience, I tend to sit at the front with my back to the screen, I watch the audience, after all, I’ve seen my work! I don’t need to see it again! It’s always interesting, nerve-racking and educational for me to watch the crowd. Do they react the way I intended? Do laugh at the right places? Smile? Cry? Overall, the audience responded the way I hoped. Jayme made me laugh every time Paul Bellini’s character spoke, as he have me a sarcastic glare, knowing full well that “Gerry” is based on him. The mostÂ nerve-wrackingÂ part of the evening was watching Maureen respond to hearing her own story, and her son’s.

Please, comment below.Â We reallyÂ appreciateÂ your feedback, and sharing your stories.