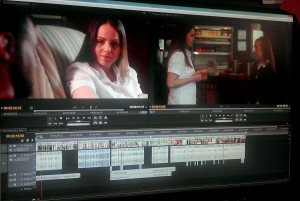 Without a doubt, the most common question we’re asked is: “when is the next episode?”. I like to share the date as soon as I know. This year, we’ve been aiming to release episodes on the first Thursday of every month. That means there should be one on June 7th? Right?

As you know, Out With Dad is a project that we have all been volunteering to make. That means when paying work comes up – we have to focus on that first. WHICH SUCKS. I had a feeling this month was going to be busy for me, so that’s why I’ve just said 2×11 will come out in “early June”… vague and ambiguous, I know. Well, that’s because I was worried I may not have the episode ready on time. As it turns out, I was right to be worried. I’m swamped with work. Not just paid-corporate work; I’m preparing to go to the Banff World Media Festival to represent Out With Dad. I’ve also been working tirelessly on the season three scripts.

Why am I working on season three scripts, when I should be working on editing season two episodes?

A very good question, with a good answer: Producer Eric Taylor needs the season three scripts right away. In fact, he needed them many weeks ago so that he could start breaking them down with a production manager to figure out our scheduling and budget for season three. He needs to right away, or else we’ll run out of time to shoot this summer! If we don’t shoot in the summer, we’ll have to wait to spring… and you don’t want us to wait until spring, do you?

I’m really excited about season three. With a budget, our cast, crew and myself will get be paid and we can cover our costs (not coming out of my pocket). If we all get paid, Out With Dad never has to be a second priority. As a first priority, it means after filming, we’ll go right into post-production, and then right into releasing the episodes. It also means we’ll release them more frequently. That’s what we all want, right? More episodes, less waiting!

There are two ways you can help us ensure season three is both long and fast: 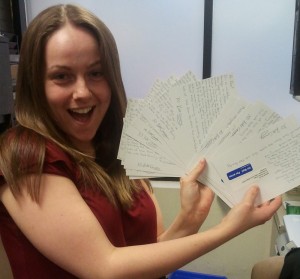 Go to www.outwithdad.com/contribute. Donate what you can. It doesn’t even have to be much. Every dollar will go a long way. Have a look at all the donation tier levels, see what perks we have that you might really enjoy receiving! Like the postcards from the cast that people have been receiving from Kate, Will, Lindsey, Corey, myself and others!

Maybe you can’t help us financially – but you can simply share us! Tell your friends! Post links! You never know who might see it. If enough people are watching, maybe someone super-rich will see it, right? Well, you never know!!

Oh ya… I nearly forgot the whole point to this post:

When is the next episode coming?

Thanks for your patience. It will be soon. It’s almost done.