Songs in the Finale Episode 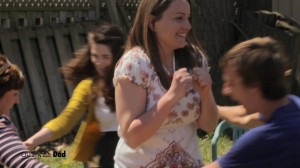 We have talented fans!

I”d be on search for the the past few months for just the right music that Rose and the gang would be listening to at her Birthday/BBQ in the finale episode. While editing, I’d used Lara Martin’s “Steady Beating Drum” as temp music to help me along. It was the right tempo, rhythm and spirit for what I was looking for. You first heard this song in episode 1.04 “Party Out”, when Kenny drags Rose to the dance floor. While I’d always considered finding a new piece of music for the beginning of the BBQ with all the dancing, it was too perfect to change. Also, it’s been established that this is a track that Kenny is a fan of, so why wouldn’t they listen to it again? It’s the last episode, and I’m a big fan of going full circle. So in the end I chose to revisit this song. When I contacted Lara to ask for permission, she was delighted.

I needed to find more music though. The whole BBQ is actually about six scenes. I felt there needed to be at least three songs in total, to give a sense of time passing. The third song was the next song chosen. It was found next by my friend Carly Rhiannon, who was the music supervisor of Leslieville. She told me about the song “27 Degrees” by Blue Cougars. She pointed out the line “sure hope you’re there to open up the door”, which we both thought was a cool foreshadow.

The second song was trickier to find. It had to be just the right mood – it would be included on the same playlist as “Steady Beating Drum”. It had to have just the right start. It also couldn’t be too distracting from the action, while at the same time it going to be played quietly so it needed to have a richness to it. It needed to survive my manipulating the audio to sound as if being played on outdoor speakers. I had lots of troubles searching for the right song. I eventually opened it up to the audience, I asked YOU if you had music to submit. Turns out, there are a lot of talented song makers out there!

Here are just some of the bands and musicians who submitted work or were referred to me by mutual friends. I was so impressed by everything I heard, and think the OWD fans should hear it too! Click on their names below, which link to their music.

In the end, I found just the right song! It’s beautiful, called “Spider Dance” submitted by a Scottish fan named Alice Ishbel Watson. Her band with Adam  von Buhler is Map & Key. Be sure to check out the Map & Key Facebook Page by clicking here, and visit/subscribe to her YouTube channel here. Listen to all of her music, it’s amazing! Below I’ve embedded  the music video to “Spider Dance”, which is breath taking.

Thank you again to everyone who submitted their work. I was impressed by everyone.