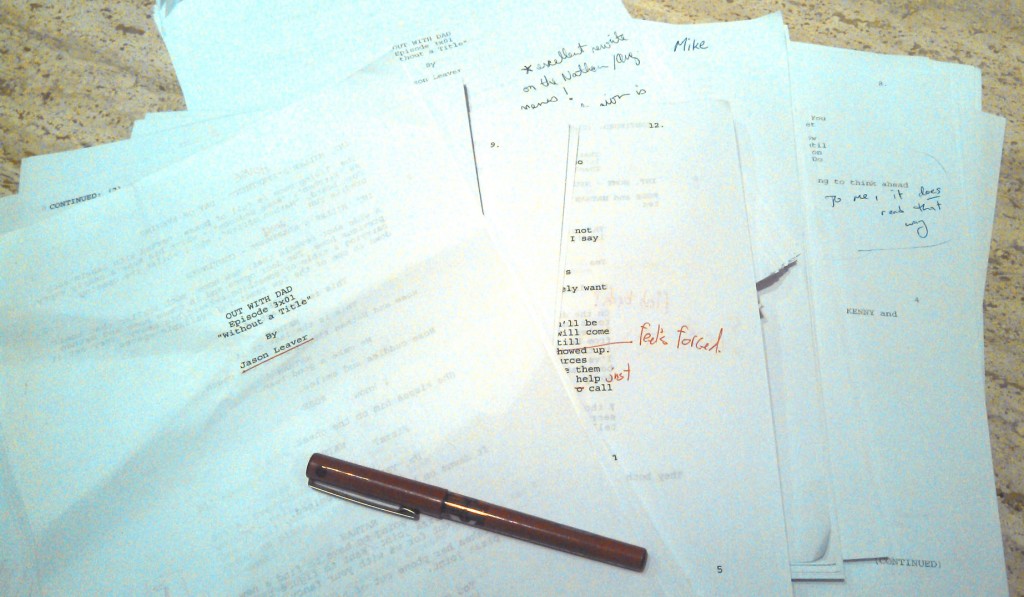 Tonight we completed reading through the scripts for season three. There were lots of laughs, some tears shed too.

As I expressed last time, the writers’ table read is a very important part of my writing process. I’ve had the good fortune to do this time and time again with my friend George Panayotou as moderator. There are a lot of writers out there who might benefit from his experience as moderator. I asked him to share his thoughts on how to run a good table reading session. Here’s what he has to say:

A table-read is often the first chance a writer gets to hear their story told by actual people, with those people also offering their first thoughts, impressions, and opinions of the story they have just read. I think a good moderator knows what feedback is constructive and ensures that the flow of that feedback is steady, so that time isn’t wasted by getting mired in things that take away from the ultimate goal of the read – helping the writer tell the best story they can.

I’ve done a few of these over the years, and I’ve found that there are a few rules you can lay down at the beginning of your session that will help the writer get the most out of the feedback given, and will also guide the people giving the feedback into providing constructive criticism:

Allot a certain amount time for each person’s feedback on each scene or chapter that is read – however you want to break it up will be up to you and the writer. You can use an egg timer, but as you get more experienced you’ll see that some people have really great feedback that might take time to articulate. In which case, be flexible…within reason.

Ok, I know I said be flexible, but within REASON. Part of moderating is knowing the readers’ style of feedback, and how long it takes each of them to give it. Aside from the balanced feedback-givers, there are “talkers”, who, given the chance, can go on forever, and “notetakers”, who say little, but prefer to write out their feedback or even take a story home to sit with in private. Most of the time, everyone will have something to say, but not always in the same way. Which leads me to…

There’s no such thing as a bad idea, only a poorly executed one. You should encourage the reader(s) to think of framing their response in terms of how the story presents challenges to them as a reader, or how it excites them as one. If the writer is not connecting with a reader on something, tell them, and always try to explain why. Remember: if it’s not in the text, it’s not in the text. This is good advice for writers as well.

BAD: “Is Rose moody because she’s going to end up losing her mind?” (jumping the gun)

GOOD: “I don’t understand why Rose was happy in the last scene with her dad, but not in this one, the transition seems abrupt.” (honest, direct impression with example for backup)

GOOD: “I felt like the tone of this scene is so radically different from the others, that it takes the story off-track (cite examples) – I’m confused about its intent.”

I am a big fan of writers remaining mostly silent during the read/feedback session. Trust me, the real world will be far less inclined to be merciful to their writing, and they’ll have many chances to defend their work to the public. By suppressing the urge to defend their work, a writer:

I’m not entirely against readers adding to each other’s critiques, as long as they’re respectful. A moderator can always reign it in when first impressions generate into a full-blown discussion. I suggest setting a two to three-hour limit to the feedback session, with a break for food and refreshment at around the mid-point to help everyone freshen their minds and fuel up.

The writer may have a question they need answered, especially if it was a detail that the readers didn’t notice, but the writer hoped they would. I’m fine with this, as I’m fine with a reader asking a question, but the rule abides: as long as it’s important to the story. This doesn’t mean, “did you notice how eloquent I was in this paragraph?”, a reader who notices and wants to compliment should and would do so.

Remember, the goal of the group is to put things like ego, personal preference and so on aside, and just help the writer write the best story possible.

Thanks for sharing George!