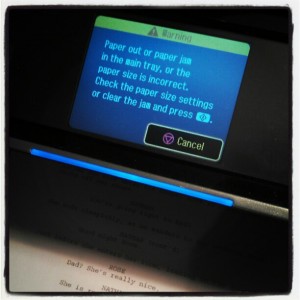 Tonight I hosted a table reading of my third season scripts. All together, it is just over 130 pages. Five of us met, so that was a lot of paper!

Hosting a writers’ table read has become a tradition for me. It’s a valuable step for me as a writer. It all began several years ago when my friend, George Panayotou, started hosting a writers’ group. That writers’ group was intended for short stories, but I asked if it would be okay to bring my short scripts. This was back when I first started writing Out With Dad. Now I do this for every season. I invite several writerly friends, who are not cast members, to sit with me and read the scripts out loud.

It’s a very important step for me. It is the first time I hear my words being spoken outside my head, it’s useful to know how things sound. After an episode is read, we go around the table and each person shares their 2¢. From this feedback, I can identify potential story issues that I may otherwise not have noticed because I’m too close to it. Or perhaps there’s a subject that I thought was clear, isn’t. The opposite is true too, maybe I’ve harped on something that was perfectly clear in the subtext. 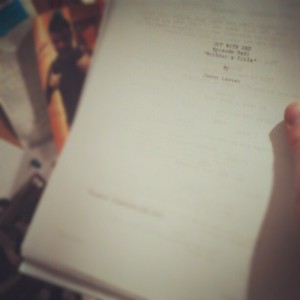 Tonight we got through the first eight episodes of our next season. Overall, everyone seemed to enjoy. The feedback from George, Eric Taylor (producer of seasons 1 & 2), Sarah Joy Bennet (who played “The Girl on the Subway”) and Mike Donis (creator and star of Pete Winning and the Pirates) was very informative. I have a lot to digest now, and a lot of work ahead of me. We’ll meet again in a week to go over episodes 9-16. After that, I have a week to make revisions before the cast table read. January 13th will be the cast’s first time reading the scripts. We’re all really excited!