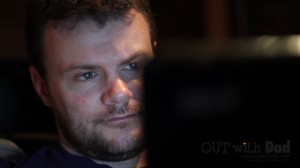 It has been asked if the websites and Google search results in the opening scene of episode two are real.  The answer is yes.  Well, sort of.  Maybe “not anymore” is more accurate.  Allow me to explain.

The webpages seen in the episode are real.  They’re from sites that advise parents to help make their kids straight. They presumptuously state how awful it must be, how it’s all a choice, blah blah blah.  The Google results Nathan receives aren’t the same results you’d get today – but those are the kind of results you’d have gotten about a year ago.

Let’s jump back in time…

In April of last year the idea of Out With Dad came to me while sitting on the subway.  As soon as I could get access to the internet I started searching for information wondering what was out there.  I tried search queries such as “gay teens”, “parenting gay teens”, “daughter coming out”, “my child is gay” and the like.  I was very disillusioned.  It seemed to me that 80-90% of what I found was information from very right-winged, often religious, ‘family’ organizations with tools and information aimed at “preventing” or “curing”.  It was stuff like “it’s not your fault, but it’s up to you to help your child follow the right path” and “choosing not to be gay”.  I was irate.  One good thing came out of this: my disillusionment turned into determination to make this project happen.  Maybe, just maybe, if I could get this thing off the ground I’d have an example of positive attitudes and behaviours towards LGBT people, their friends & families and their daily trials & issues.

I set out writing Out With Dad immediately.  It was intimidating because I felt out of my comfort zone of sci fi, horror and action.  I did a loads of research and found that there is positive information out there.  I had to dig deep.  As mentioned by Johnny in the episode,

PFLAG Canada’s website is a good one.  I felt like I hit gold when I found it.  There’s a wealth of information there that really helped inform me of what it might be like to be gay or to have a gay family member, what people’s emotions and stressors might be like.  There are some great resources for teachers with exercises that help highlight just how hetero-ist our society, language and culture is.  It was also a source of inspiration for future story lines. 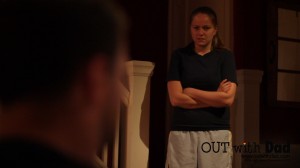 My own story of placing myself in the mindset of a dad trying to find information seemed like a good story, too.  Interestingly, at some point I dropped the scene from the script (I don’t remember why).  Recently I changed my mind, as I wanted a little more Rose/Nathan shared screen time.  As it happens for a show called Out WITH Dad, there is fairly little Rose/Nathan time.  Most of their more charming and fun scenes occur in season two and beyond.  Rose interrupting Nathan’s research seemed to fit the bill.  With little time before the launch of the first episode we had to get filming right away.  Before we could get the camera rolling I’d have to load up Google and repeat the process of finding all those websites.  To my dismay (as a filmmaker) and to my delight (as a friend of diversity) the results returned were nearly all positive!  Has so much changed in only a year?  Granted, I was doing this during Pride Month, so that may have influenced it.  But maybe we’re all growing up, or at least the internet is.  In fact, it took nearly as much effort to find the negative webpages for the sake of filming as it did for me to find the positive ones I wanted last year for research. 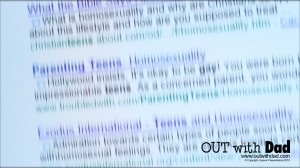 The scrolling shot of Nathan’s results is, I’ll admit, a page I put together.  Those are all real results, but not to the query “gay teens”, rather something like “help fix my gay child” or “how to cure homosexuality”.  I copy/pasted results from various searches that fit what I was looking for into a document, did a bit of reformatting and filmed it in close-up.  So yeah, I used my literary license on that one.

I’ll say this, the most delightful thing I’m reading in the feedback is the reaction towards Nathan’s loving concern.  I’ve also read some heart wrenching responses like “I wish I had parents like that”.  So it would seem I’m accomplishing my earliest goal: showing a positive example.  I have always anticipated that the largest portion of our audience would likely be young lesbians – but my desire has always been that just as many parents will be watching too.  I’d like to say thank you again to everyone who’s sharing Out With Dad.  I want as many people to see it as possible.  With any luck we’ll open some minds, help some families and friends, while having some fun along the way.