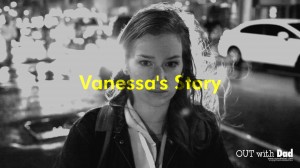 Vanessa’s Story is a new web series that we created in secret while filming the rest of Out With Dad. In the last moments of Out with (Song and) Dance, we saw Vanessa leaving home – but to where? In this dark and gritty spin-off series, running parallel to the story of Out With Dad, Vanessa’s Story tells of the harsh reality in store for many teens when they aren’t accepted by their families because they came out. For Vanessa, being true to herself means leaving home for the uncertainty and the danger of the streets of Toronto.