Out with Burnup – a Super Knocked Up Crossover! 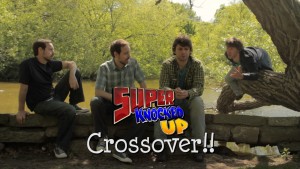 The internet is full of really cool people! Among these people is Jeff Burns, who I had the pleasure of meeting at the 4th Annual Indie Series Awards (then called Indie Soap Awards). He’s the creator of Super Knocked Up: a hilarious series about Jessica James – a super-villain who gets knocked up by womanizing superhero Captain Amazing. Now she has to raise her baby with her arch nemesis.

I’ve been a fan of his show since before we met. To become his friend has been a great privilege. Jeff started making smashups of his show with other great web series (you can see Caitlynne Medrek in her role as Lex from Clutch by clicking here).

Well, we made mash up too! Watch Nathan, hanging with his nephew Chris, who is visiting Toronto from New York. Chris has something he want to tell his uncle, Rose said he’d be cool… (side note: Jeff says it isn’t canon to SKU… I’m not saying this isn’t canon to OWD)

You dive right into Super Knocked Up with it’s second season, embedded here: