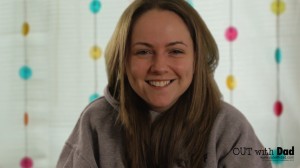 Rose has decided it’s time to get back into an old habit: keeping a diary. Only this time she’s going do it by video!

We continue the story of Out With Dad through Rose’s video diaries while we raise funds and prepare our third season production schedule.

This minisode was first available to our supporters who are members of our VIP Out With Dad private Facebook group on December 27th, 2012. It went live to the public on January 3rd, 2013. To find out how you can watch episodes early, visit outwithdad.com/contribute for details.