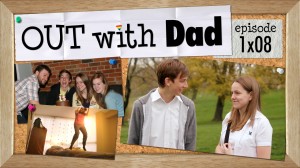 “Me and Kate and Kate and I, and probably Kenny’s biggest scene to date, not to mention the first official coming out for Rose, shot outdoors, so the weather has to be perfect, oh and Jason wants the world to freeze, the people in the background, the trees in the wind, the cars on the road: they all have to stop dead when Rose finally says it, “Kenny, I’m Gay.” Shouldn’t be a problem right?

“We were lucky that that Saturday, which also happened to be the Saturday after my Friday college graduation.  Turned out to be one of the lovely spring days that we wait all winter for. Weather, check. We were also lucky that the TTC was running on schedule and we all made it on set in one piece and on time. That’s always nice. And a fun, and crucial, and life saving fact; this scene was actually the scene that Jason had me read when auditioning for the role of Kenny. Now why that is so life saving is, because this was the audition scene, I had already stressed and worked and burned those lines into my head about three months back, so the fact that it was my graduation the night before, and an after party followed that, and there was little time to work the lines the night before, did not kill us or me or the crucial scene in the final episode of season one. The day could not have went smoother. Kate was awesome, and prepared, and heartbreaking and hilarious as always, and Jason – well, Jason was there and ecstatic and professional as always, armed with his razor sharp vision and zip off shorts. And as it turns out, freezing the busy Toronto traffic on a beautiful Saturday afternoon is not as impossible as it sounds. There really is a such thing as movie magic, or webseries magic I guess in this case. The day was a blast, we wrapped early, and the end result turned out great. So enjoy, again, and again, and again until season two airs, where we have a whole other lot of great episodes for you to enjoy.”