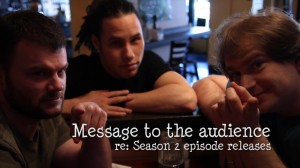 While filming scenes for upcoming episodes, actor Will Conlon, producer Eric Taylor and series creator/writer/director Jason Leaver took a moment to explain to the audience our release strategy for season two.

Because episodes are going to be longer this season than last year, there won’t be enough time to finish post-production of episode with only two weeks between them.  Nervously and reluctantly, Jason Leaver made the decision to slow down the release new episodes to once a month. In fear that would be too long between episodes, we decided to produce “minisodes” that can go between. These minisodes will only be one scene long, but we hope it’ll be enough to tie us over until the beginning of the next month for the next full-length episode.

||Out With Dad: Season Two|Heading|||