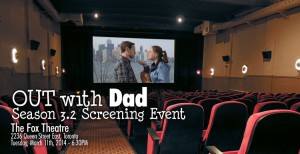 Join the cast and crew of Out With Dad on Tuesday, March 11th at The Fox Theatre in Toronto’s east end for our Season 3.2 launch party! We’ll screen all eight episodes of the next block of Out With Dad/Vanessa’s Story, on the night we debut episode 3.07 – the first of the spin-off series Vanessa’s Story.

Bonus!!! We’re joined by our guests: the cast and crew of  the new series Asset! We’ll screen episodes 1 to 7, including episodes that are unreleased. Asset is currently only available on JTS.TV.