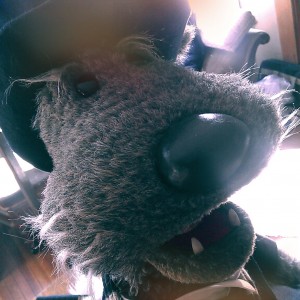 This weekend I had the privilege and pleasure of attending the premiere Robert Mills’s Ruffus The Dog‘s Christmas Carol. I’ve mentioned Ruffus mentioned before, one of the web series created here in Toronto, Ontario. Ruffus was originally conceived as a television series and migrated to the web for the whole world to see.

Robert Mills and his talented team of puppeteers, costumers, prop-makers and filmmakers shoot this episode of A Christmas Carol over a year ago. The performances are amazing, truly inspiring! The script is hilarious; it was so fun to hear Robert’s sense of humour at every turn.  Robert has been tinkering away in post-production ever since. The sets are beautifully rendered in CG with exquisite detail, and the compositing is glorious. There are several original songs in this; each of them really touched me – I even found myself getting a little teary eyed!

There’s even a Flying Spegetti Monster in it, what’s Christmas with out a little FSM?!

Seeing the kids in the audience meeting Ruffus after the screening was a pleasure, it warmed my heart to see their excitement. Of course, even more exciting: meeting Ruffus myself! 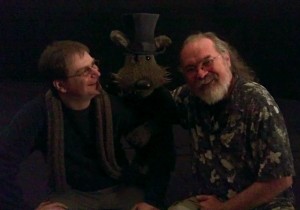