Out With Dad on Patreon!

Today we are officially launching our Patreon!

Patreon is a crowdfunding platform that enables fans to become patrons of the arts. With Patreon, you may pledge any amount you’d like to give on a monthly basis to help support the production of Season 4. We choose to use Patreon as a means to fund this season because we know fans don’t want to wait to see new episodes… like you had to for Season 3. This season, episodes will be filmed, edited and published once per month.

Many have noticed we soft-launched our Patreon account early this week, at the time of writing we already have 19 patrons who have pledged a total of $255. A great start!

Moving forward, the cast and crew have agreed to work below industry-standard rates – but even at the rates we agreed upon, we still require a minimum of $1500/episode. Before we reach this goal, it means there will be no time for prep work, a rushed production day, small cast, small crew, only one scene at one location. It also means if other professional work opportunities arise for a cast or crew members, they will have to do that instead; this could mean delays in production or compromised quality. If we reach our goal $5000/episode it would alleviate these other concerns – and could make longer episodes with more scenes and locations, and a larger cast. 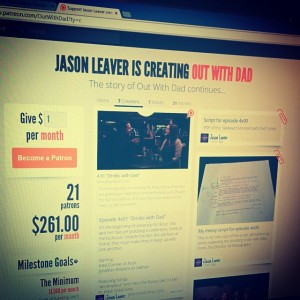 The first episode of Season 4, “Drinks with Dad” has already been completed and uploaded. This one was produced thanks to a generous donation from the cast and crew of Season 4, to help kick-off our Patreon. Patrons who pledge $3 or more per month can see it now by click here!

For more information about episode scheduling and how you can become a Patron of Out With Dad, visit /whenisthenextepisode.