This is perhaps the highest honour Out With Dad has received to date. The Canadian Screen Awards, the new awards program replacing the former Gemini and Genie Awards. For our international friends, this is the equivalent to the BAFTAs in the us U.K. or in the U.S., if the Emmys and the Oscars ended and were merged into one. 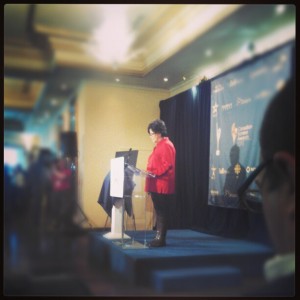 “The Canadian Screen Awards celebrate the beginning of a new era in multiplatform entertainment,” Academy CEO Helga Stephenson said the nomination press conference this Tuesday. “We’ve updated the Academy to today’s multi-screen reality with the launch of the first ever Canadian Screen Awards.” 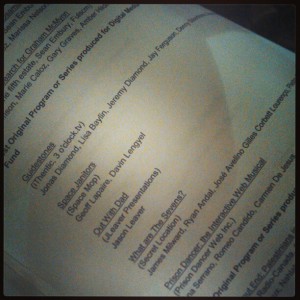 One of the newest award categories created by the Academy of Canadian Cinema & Television, is Best Original Program or Series produced for Digital Media – Fiction. I was present at the ceremony when they called the nominations, it happened very fast and was quite the blur even while it was happening. I heard them name several web series I know made by friends, such as Guidestones, Space Janitors and Prison Dancer: The Musical. Somewhere in the flurry of names I heard them say “Out with….” what? What did they say? It wasn’t until I turned to my friend Jonathan Robbins sitting next to me, congratulating and smiling, that I realized they had said Out With Dad.

I tried to tweet/post the news right away but my fingers were slippery and tingling. My head fell back and I let out as gasp of excitement. 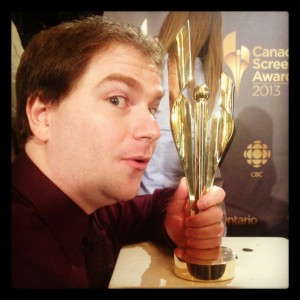 The Academy also unveiled the new award statue, which does not yet have a name. I had a chance to get up close and personal, see how it felt.

There will be a gala ceremony on February 27th, at which they will announce the winner of our category. However, considering the fact that we’re named among these fine web series in the first ever Canadian Screen Awards – this is something all of us nominees will get to carry with us for the rest of our careers. As far as I’m concerned, each of us has already won.