Out With Dad is excited to be nominated for eight awards at the 2nd Annual Indie Intertube Awards. The award ceremony will be broadcast at www.minglemediatv.com on March 11, 2012.

Out With Dad is proud to be nominated alongside some very talented people. The nominations include: Best Original Soundtrack, Best Side Kick (Cory Lof), Best Additional Content, Best Actor (Will Conlon), Best Writing in a Drama (Jason Leaver), Best Ensemble Cast in a Drama, Best Drama and Best Editing (Jason Leaver). 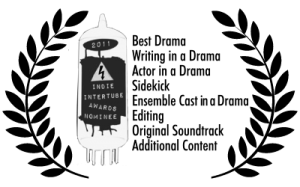 It is exciting for us to be recognized by the webseries community for a variety of achievements. We are very excited to be nominated alongside some of the best shows the web has to offer. Congrats to our fellow nominees!