Join us on Super Geeked Up! 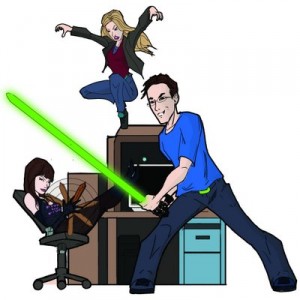 We were honoured to be the guests on the 100th episode of Super Geeked Up! Kate Conway, Lindsey Middleton, Caitlynne Medrek, Jonathan Robbins and myself (Jason Leaver) participated in a the live broadcast, which is now available below.

Jonathan and I have been guests on Super Geeked Up before, and it’s always a fun time. We met Jeff Burns, the creator and co-host, at the (then titled) Indie Soap Awards in NYC in 2013. He’s been a great friend ever since. His show Super Knocked Up is an action/comedy series about a female super-villain who gets knocked up by a superhero and has to raise the baby with her nemesis. I’m a fan of the show, not only because of its hilarious premise, but also because it manages to still very tender with its drama, while still being an outrageous superhero/villain show. He created Super Geeked Up, a weekly all-things-geeky discussion show with international guests who love things nerdy, as a way to encourage engagement with his audience. Well, it worked! His show is a hit, and so is Super Geeked Up in its own right. You can watch both of these shows on the official YouTube Channel by clicking here.

While on the show, we spoke about geeky things, played geeky games and also answer questions submitted by the audience, including the most often asked questions of the OWD audience about OWD!

Note: this post was edited to be in past tense, and the recording of the broadcast added.