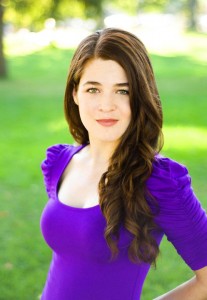 We’re very excited to introduce our newest member to the cast of Out With Dad: Laura Jabalee!

Last February I had the pleasure of first seeing her perform in the Theatre Erindale production of The Women, in which she played the leading role of Mary Haines. I was in the audience one night, invited by her cast-mate, our very own Lindsey Middleton. Lindsey busily played three vastly different roles that evening; it was such a pleasure seeing her wearing such different characters in one night. (You guys have no idea how funny Lindsey can be.) The play has big cast, and the stage was filled with amazing performers, everyone one of them shined. But I will say, when Laura was on the stage: wow, did she grab your attention. You could feel her feeling every word Mary Haines uttered.

Fast forward several months, to April 5th when Laura walked into the room to audition for Alicia Van Harren. Alicia is the girl Kenny asks Rose about in episode 8. I didn’t make the connection that it was Mary Haines I’d be seeing that afternoon until I saw her face to face. I was delighted. Her audition very good, and then even better each time we did a run-thru after a bits of direction. Laura was kind enough to come in for a second audition on Saturday evening, this time reading with Corey Lof. Both our instincts told us that she was Alicia.

All of us involved in the casting process for season two are amazed by the talent that walked through that door. For the role of Alicia we narrowed it down to several potential Alicias for the callback with Corey. Each of them are very talented actors. I look forward to working with all of them in Out With Dad, as I invited them to join the cast – and over the next little while we’ll find roles for them that suit them just right. The casting process is far from finished. We’ve got lots of roles still coming up still, including for scenes we’ll be filming at the end of this summer. With our first day of filming approaching: Alicia was crucial to find right away!

We’re so happy to have Laura join us. You can read her bio on our cast bios page here.

There are other roles of new characters that have already been cast, but those are very hush hush. You’ll just have to wait to find out…    😉