Getting some press with Playback Online 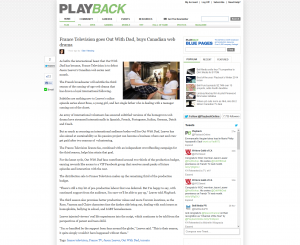 Etan Vlessing had the following to say about Out With Dad’s upcoming third season in today’s Playback Online Magazine, which debuts next week.

Link to the original article by clicking here.

As befits the international beast that Out With Dad has become, France Television is to debut Jason Leaver’s Canadian web series next month.

The French broadcaster will subtitle the third season of the coming-of-age web drama that has drawn a loyal international following.

Subtitles are nothing new to Leaver’s online episode series about Rose, a young girl, and her single father who is dealing with a teenager coming out of the closet.

An army of international volunteers has ensured subtitled versions of the homegrown web drama have streamed internationally in Spanish, French, Portuguese, Italian, German, Dutch and Czech.

But as much as securing an international audience bodes well for Out With Dad, Leaver has also aimed at sustainability so his passion project can become a business where cast and crew get paid after two seasons of volunteering.

The France Television licence fee, combined with an independent crowdfunding campaign for the third season, helps him attain that goal.

For the latest cycle, Out With Dad fans contributed around two-thirds of the production budget, earning rewards like access to a VIP Facebook group that receives sneak peaks of future episodes and interaction with the cast.

The distribution sale to France Television makes up the remaining third of the production budget.

“There’s still a tiny bit of pre-production labour that was deferred. But I’m happy to say, with continued support from the audience, I’m sure we’ll be able to pay up,” Leaver told Playback.

The third season also promises better production values and more Toronto locations, as the Rose, Vanessa and Claire characters face the darker side being out, dealing with such issues as homophobia, bullying in school, and LGBT homelessness.

Leaver injected viewers’ real life experiences into the script, which continues to be told from the perspectives of parent and teen child.

“I’m so humbled by the support from fans around the globe,” Leaver said. “This is their season, it quite simply wouldn’t have happened without them.”