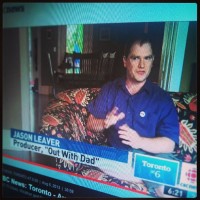 Series creator Jason Leaver was interviewed for a CBC News segment about web series production in Canada. It was aired on CBC Radio World at Six on Monday, August 5th, 2013 and on the local Toronto news on Tuesday, August 6th  at 6pm and 11pm.

A text version of this news story can be found here: https://www.cbc.ca/news/canada/story/2013/08/05/arts-web-only-tv-series.html.