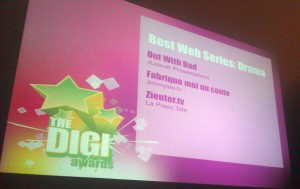 Last night actress Kate Conway, series creator Jason Leaver, composer Adrian Ellis and producers Natalie O’Brien and Vanya Garraway were all on hand at an exclusive party, at which  Mark Greenspan, Executive Producer of nextMEDIA 2011 announced the “The List,” the definitive index of Canada’s digital elite and the 2011 nominees for this year’s Digi Awards. The Digi Awards are Canada’s premier showcase of the remarkable digital media companies, projects, products and pioneers that are putting Canada at the forefront of the international mediascape. There are 31 categories, and Out With Dad was nominated for Best Web Series: Drama. Fellow nominees include “Fabrique Moi Un Conte” and “Zieuter.tv“, both of which are produced for CBC Radio.

We’re really really proud to be considered among the best of Canada’s digital community. On December 6th the DigiAward winners will be announced at a ceremony hosted in our own backyard, Toronto. Wish us luck!