Writing Out With Dad

I’ve heard many tips over the years on how to write a good screenplay.  There are hundreds of books on how to do it, many of which are well respected and often recommended.  One thing I have learned about all these tips and tricks I’ve been told: they’re all wrong.  Well, they’re all wrong for me, anyways.  That’s not to say these aren’t excellent tips for someone else.  I’ve come to the conclusion that, if anything, it’s a matter of figuring out what works best for you.  And that can only come from trial and error from loads of practice. 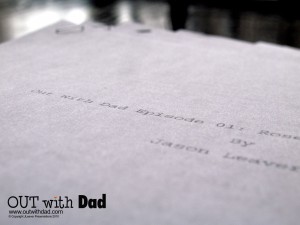 But that’s not what you’re looking to hear is it?  That’s a lame answer.  So I’ll tell you what works for me and what doesn’t work for me.  With any luck some of it might apply for you.

||The Technical Stuff|SmallType|||
Often I do a first draft in a barebones word processor.  I pay no attention to spelling, grammar, formatting, tense, repeating myself, spelling, grammar or the like.  Just hash it out.  I like having a laptop/netbook/portable computer so that I can work anytime inspiration strikes.  I also always have a notebook with me should I not have the computer.

I use a screenplay writing software called Celtx.  It’s not a perfect program, the spell check kinda sucks, and only has US English.  But it does make typing a properly and professionally formatted script pretty easy.  Oh, and it’s free!  It’s an open source and cross platform program.  If you don’t have something for writing screenplays – download it.  It’s awesome.  There’s even a mobile edition now, which I haven’t tried.

||The Rules:|SmallType|||
“Write what you know”… that’s probably the single most common piece of advice I’ve heard.  I think I heard it a million times before, during and after film school.  If there’s one thing Out With Dad has taught me, is that rule does NOT apply to me!  I didn’t know that before I started Out With Dad, but I’m glad I know now.  I’m not a father, nor am I teenage lesbian (nor have I been).  The thought of writing either characters was terrifying!  What if I get it wrong?  What if I offend people?  Won’t it be horribly unauthentic?  These concerns nearly crippled me before I started.  So I buried my head in research.  I didn’t want to make any horrible mistakes such as falling pray to the stereotypes of so many mainstream lesbian story lines.  I wanted this to be as real as I could make it.

When I got into writing, I ignored my lack of confidence just did it.  I discovered something very quickly: writing what I didn’t know is freeing!  I just wrote and wrote and wrote.  I didn’t care if it was any good at first.  If something really sucked, I’d skip that bit and move onto something else.  Who cares if it sucked?  Nobody but me was going to have to read it.  I never deleted anything, mind you.  I started a file called ‘skipped for now’ or ‘crap’ or something like that so I could cut/paste my crap into… just in case.  It felt great!  Suddenly I was a dad, or I was teenager, or I was confused girl, a skater-dude with no interest in school, I had closed minded parents, I was a closed minded parent.  None of these people are me, so I was never embarrassed or fearful of exposing myself.  I just indulged.  Whenever I wasn’t sure about something I’d look it up, I’d ask around.  I remember once asking a question on Facebook “Pop quiz: do 15yr olds of today still play hackey sack at lunch break, if not – what do they do?”  Within half an hour I had several answers.  By the next day I had dozens.  (the most common response I heard was: texting, hence Kenny and others in the background of episode three texting one and other despite being right in front of one and other)

It was around about this point I realized I was breaking another rule I’d been taught repeatedly.  This one I faithfully believed in:

“Plan your outline”.  All of my favourite big stories had everything planned from the beginning.  So naturally I thought I should do the same.  Think of Buffy, Battlestar Galatica, Babylon 5.   But what I’ve found for me, is that I get so hung up on the details.  As a result, I can’t allow myself to just write, write, write and be inspired.  I get stuck on worrying about making sure A gets to B, and then to C, and so on.  It limits me.  What if I have an idea for X, but I’m still busy on figuring out D and E?  Do I throw out X?

For the first time in my life I just wrote scenes I thought would be cool or interesting in any order they came to me.  I think one of the first scenes I wrote was Rose’s coming out to Kenny, next was that silent scene of Rose encountering a girl on the subway.  Most of the first 100 pages I wrote you won’t see until season two or three, or maybe even four!

(I just remembered now, I wrote a whole scenario with Rose being forbidden to take her date to the prom, but that seemed unrealistic in this day and age, so I cut/paste that into my ‘crap’ file.  I honestly thought we were past that.  About two weeks later Constance McMillen entered the news.  Go figure.)

This style of care-free writing is, I believe, how Robert Zemeckis & Bob Gale wrote the first Back to the Future.  They just wrote scenes in any ol’order.  Then they wrote each scene on a cue card so they could move them around on a corkboard to sort them in the required order.  From there they could see what new scenes they might need to fill gaps to make it cohesive. 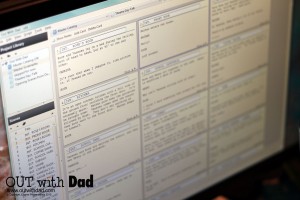 As it happens, Celtx has this cue-card feature built into it.  Life saver!  It was so much fun sorting the scenes I had.  I was surprised to discover how much was already there.  Wrote a few new scenes to connect things.  Re-wrote scenes to make them fit better.  It was lots of fun!

A friend of mine started a writer’s group that I would bring episodes of Out With Dad for sharing.  Perhaps in a future blog I’ll write about that group.  It was one of the most valuable steps in the process of writing and re-writing for me.

I’m sometimes asked if I know where Out With Dad’s story is going or how and when it’ll end.  I don’t know!  That doesn’t scare me either.  Look at Lost, they didn’t know what they were doing and I think they had an amazing conclusion.  They just worked it out as they went along focusing on characters and continued to allow themselves to be inspired.

Hopefully some of this will help you with your writing!  The key thing that I think applies to all writers:  ||Just write. Don’t be scared. Write.|Heading|font_size=12||

||Share your tips!|SmallType|||
Are there other writers out there who have some advice to share?  On behalf of myself and the asker of this question, we’d love to hear your thoughts and ideas.  Comment below!

Ask the cast & crew of Out With Dad anything!