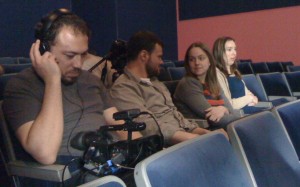 I must admit, I was more nervous than any other time we filmed ANYTHING. I’m a newbie film actress learning the ropes of the film process.  This scene shot using various special effects to bring two versions of myself was a very frightening thought. Was I really prepared to handle this? Once we make it to the Oakville movie theatre, I am comforted by the lovely cast and crew who always make me feel like one of the posse.  The very first order of business is organizing the lineup of extras that were fortunately brought to us by Will (dad/Nathan). There is a ton of people and 90% know Will. I guess he’s a pretty popular guy.  My initial discomfort is then addressed with free popcorn and fountain pop provided by the theatre. Food is always comforting for me. I now have everything I need. I am officially ready to work. 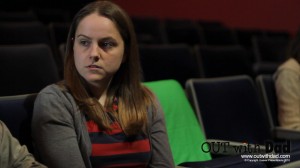 We were constantly switching between the “real” self and “brain” self. It was hard to remember what I did in each shot, because I knew it had to sync up with what the other self was going to do.  Jason is very helpful with direction so I eventually find my footing with each shot. However, time ticks away and I am getting gradually more exhausted. It isn’t long until I get into that tired-giddy mood that used to kick in at about 3 in the morning at elementary school sleeps-overs. Everything is funny and I find it hard to focus. But I have to, it’s already 3 and there is still a ton to do. 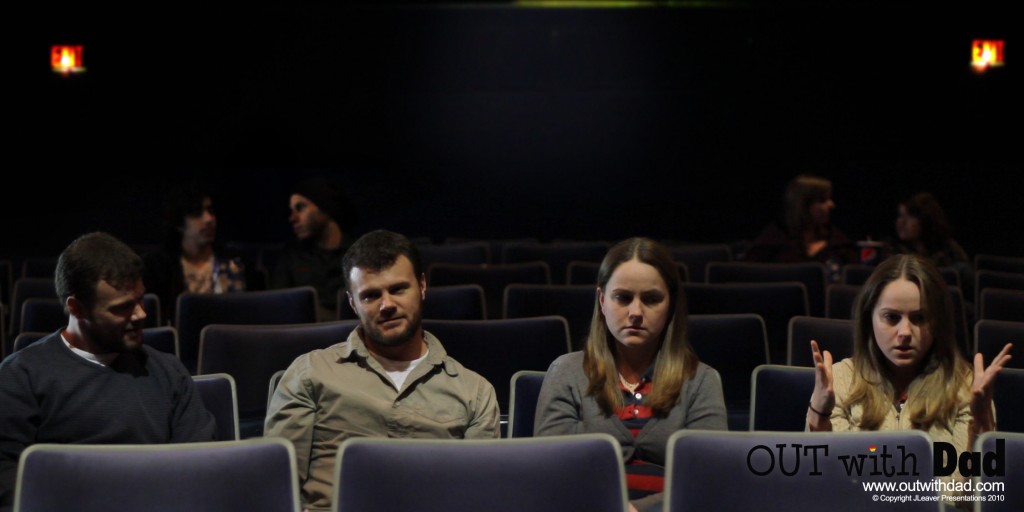 At 4am, I’m ready to cry. I have visions of marshmallowley soft pillows and cashmere sheets. Not that I actually sleep on that, but it’s a nice thought when you’re that tired. 5am…6am…WE ARE ALMOST DONE. Cast and crew are desperately waiting for the last shot on the list. I must admit, the words “that’s a wrap” have never sounded so sweet!

Without struggle, there is ultimately no reward. I cannot describe how happy I was driving home to Toronto in a car full some of my favourite people in the world, all of us ready to drop. We had all made it through the night and thanks to the genius of everyone involved, had a really sweet scene to look forward to. It’s one of those moments in my life that I will never forget and always cherish.