Q&A with Will Conlon

Today it’s Questions & Answers with the ‘Dad’ from Out with Dad, Will Conlon. 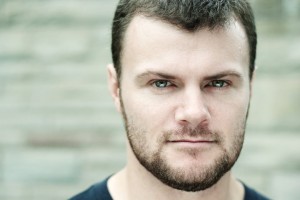 The characters and situations felt very real to me and I knew that this was something special that I really wanted to be involved with in any capacity.

||Q:|Heading|font_size=20||  At the beginning of production you shared in your blog post that you were a little intimidated because you were one of the only actors that hasn’t had any formal actor training.  Now that time has passed, how do you feel about your performance?  Has your confidence changed for subsequent shoots?
||A:|Heading|font_size=20|| Well, I definately feel I’m improving, which comes with experience and learning from those around you of course. I suppose I’ll always be a little insecure about my performance which will always help me strive to do better, which is really what an actor would want I suppose. It also helps that you give me a cookie when I do good.

I remember no such cookie giving.  I’m not that generous.

||Q:|Heading|font_size=20|| What has been your reaction to the response of Out With Dad?
||A:|Heading|font_size=20|| To be honest, the response has been overwhelming, but not surprising. I knew this was an amazing story and people would gravitate towards it. However, I am surprised at how quickly people are discovering it. I remember saying to you, “I bet the first episode will have 10,000 views in a week!” Actually, it ended up with 10,000 views in under 48 hrs! I am so proud of this show and am so glad people are enjoying it and relating to it. That’s right!  I remember that!  Come to think of it, I thought you were being far to optimistic.  Guess we were both wrong.

||Q:|Heading|font_size=20|| You’re not a father, and yet you’ve become something of a role model and example for parents.  You’ve even been asked parenting questions and advise.  How does it feel to suddenly become an authority on something that you aren’t in real life?
||A:|Heading|font_size=20|| I never thought I’d be a role model for anyone other than my nephew who thinks I’m Batman (partially my fault), and I definately don’t consider myself an authority on parenting at all. I recently answered questions for univers-L.com, a lesbian French website, and one of them was what advice I give to parents of gay and lesbian children. I felt a little unqualified seeing as I have no children of my own, but I guess as a person I felt it should be easy to answer. I suppose I try to answer those questions from that frame of mind, also assuming what I would do as a father. Just love and respect your kids. No matter what.

||Q:|Heading|font_size=20|| Episode 4, “Party Out”, was the first episode in which your character didn’t appear. And yet, your name still showed up in the end credits, this time

listed as “B-Camera Operator”.  Could you tell us how it came to be that you were a camera operator?  (on this, and sequent shoots)
||A:|Heading|font_size=20|| You bet me I couldn’t hold a camera steady for 3 seconds. I did it to prove you wrong. Actually, I’m very interested in learning more about what goes on behind the camera, in all aspects. So I asked you if I could help out and maybe, and sort of become my off camera Sensei. He graciously accepted. He’s been teaching me quite about about camera shots, editing, pre and post production. I find the whole process fascinating.

||Q:|Heading|font_size=20|| How was working behind the camera for the first time, and what was it like seeing your work in the finished product?
||A:|Heading|font_size=20|| I learned a lot working behind the camera, which I find as interesting as being in front of the camera. It was tough to get the hang of at first but once I knew what the director (you) was looking for, it got easier. When I saw that a lot of my footage was actually used in the episode I was beside msyelf. I really wasn’t sure if what I had shot up to that point was good enough.  It felt exhillerating to see some of my camerawork in a episode of OWD. 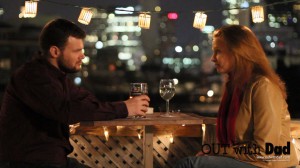 ||Q:|Heading|font_size=20|| You’ve been cast in several other projects lately.  What are they?
||A:|Heading|font_size=20|| I just finished a mockumentary film I did with my friend Todd Daggett called Making Short Docs, which we shot pretty much in a day with no script. It was completely improved.  We’re hoping to do something with it because we’re quite happy with what we got. I was also most recently cast in an upcoming short (and hopefully future feature film) called The Bridge. It will be filmed in the spring and I, once again will be playing a father. My wife will be played by Kelly-Marie Murtha, who was Nathan’s blind date, Angela, in OWD Episode 5.

||Q:|Heading|font_size=20|| You’re also collaborating on a project with Corey Lof.  Can you share what you’re doing?  How did it come to be?
||A:|Heading|font_size=20|| It’s a dark, slightly comedic thriller. I’m not sure I can say much more because Corey has a temper. A bad temper. He make’s a grizzly look like a house pet. I also heard he has a torture room in his basement, but apparently thats more for “fun”…and there’s an admission to get in. Anyway, we are aiming to film it this coming November with Ryan Moccia and it’ll be something we hope people will watch and say, “Please untie me and let me go! I swear I’ll tell everyone your movie was good!”

||Q:|Heading|font_size=20|| Are you capable of ever being serious?  No wait… that’s a rhetorical question.  Never mind.

Thanks for taking the time Will!  This was fun.