This time with Questions & Answers, I turn the questions outwards to a fan.  Our first fan Q&A is with Rita from Galway, Ireland.  was one of our first subscribers to our YouTube channel and has been an active commenter, supporter and promoter of the series ever since.  Each morning after a new episode was posted, my wife and I would look forward to seeing if “renville68” has posted anything.  We’ve always enjoyed her insight into the show.  Now that she knows this… I hope there isn’t any added pressure for season two! 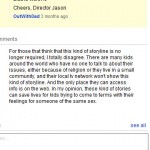 Rita's response to other commenters who are "tired" of coming out stories, on episode one.

Rita’s also defended the show when some early comments opposed what we were doing!  Let’s dive in with some simple questions first:

||Q:|Heading|font_size=20|| What about it got you hooked?
||A:|Heading|font_size=20|| What got me hooked on the story was the importance of telling the story of what it is like for a teenager having to deal with the issue of sexuality….i.e. the internal struggle, what the parent (s) will say, how they will react, the crush on best friend (many watchers I’m sure can identify with that one), coming out to friends.

This is the kind of story is a reality for some many people out there. Those that are lucky have access to support networks if they live in big cities. I think that the telling of this story is hugely important for all young people, but especially for those that live in rural areas, where they feel isolated.

My mind can’t help turning to the story told by the singer, Cheyl Wright, who grew up in a small place where she felt she couldn’t talk to anyone, and who ended up in her mid thirties in a hotel bedroom with a gun to her mouth because she couldn’t face coming out to her father or what the impact would be on her career. So the story of Rose is important for all those young kids out there who feel they have no where to turn to.

Personally, I think I’ve been one of the lucky ones who didn’t question my sexuality until I was in my early 20’s and by this time, I was living independently and had my own network support of friends around me. For those that are younger who question their sexuality it’s a lot harder.

||Q:|Heading|font_size=20|| What’s the one thing that keeps you coming back for more?
||A:|Heading|font_size=20|| A number of things:
1) Watching Rose’s acceptance of her sexuality
2) Wanting to tell her father and wondering how he will react
3) How Nathan deals with the thought that his daughter might be gay and him seeking out information and speaking to his friend about how best to handle it
4) The difficulties Rose faces in her feelings for Vanessa, and her having to move between the emotions of elation when Vanessa kisses her to deflation when Vanessa steps back from her.
5) Rose coming out to her friend, Kenny 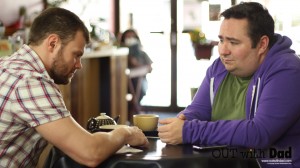 1. Scene between Nathan and Johnny…..this is an important scene for any parent out there, as this is the first time (by my recollection) that Johnny tells Nathan that he needs to tell and reassure Rose that he loves her no matter what. And it is something that Nathan continues to reiterate throughout the 1st series. 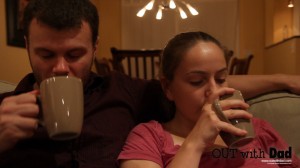 2. Actually, I find the scene where Nathan and Rose are having some tea quite a sweet scene. It’s the simplicity of the scene, but yet it conveys so much (and not only about how to make a decent pot of tea of which I’m aware there has been much debate!). In the middle of all the confusion for both of them, having the tea together just gives them time to be….no words are needed.

||Q:|Heading|font_size=20|| You’ve been such a big supporter of Out With Dad. Often we find that you tweet and re-tweet, comment on Facebook and YouTube. You’ve even defended us on YouTube when people put us down, or miss the point. You’re obviously very passionate about our show. Why? Why do you invest so much effort? (we’re very thankful!)
||A:|Heading|font_size=20|| In the world that we live in, there are so many teenagers commiting suicide because they have no one to turn to talk about their sexuality. They need to see themselves reflected in shows such as this, so that they can see they are not alone. And with the recent spate of suicides in the US recently, it shows us that there is still a lot of work to be done, and Out With Dad certainly plays its part in helping those kids, especially as it is on the web. It is easy to promote/defend a show when it is something you believe in.

||Q:|Heading|font_size=20|| I’m always amazed about the little things you notice and that you take the time to offer some analysis. Like the importance of the subway scene, the parallels between Rose and Nathan, so on. I’d love to know where you think things are going? What is it building up to?
||A:|Heading|font_size=20|| Well you left us with the cliffhanger of Rose going through the motions of wanting to talk to Nathan, so I would see this as the next step. We’ve seen over the 1st series that they have a close relationship (i.e. if Nathan wasn’t tuned into Rose, he would never have picked up on the idea in the first place that she might be gay) and I think there is a need within Rose to be honest with her father.

She has admitted that she has an inkling that he knows already, but of course there still remains a part of her that is unsure about how he will react and the fear that her admission will change the close relationship that they have. Added to the fact is of course the reality that Rose only has one parent, so I’m sure the fear of losing Nathan is greater.

Vanessa is a bit of an enigma, but I think for the 1st series, it was important to tell Rose’s and Nathan’s story. For the second series, I would expect to see a little more insight into what is going on inside Vanessa’s head. We already know that her mother isn’t very supportive, and it explains why Vanessa pulled back emotionally from Rose. It takes courage to take that leap of faith and be with someone, so I guess the questions will be: a) will Vanessa pull back or move forward, b) what part will her mother play in the series, c) might Vanessa confide in anyone else about her feelings (like Rose did with Kenny?)

As to what it is building up towards….I think that we know that once Rose tells her father, that we’ll see their relationship grow stronger. I’m sure Nathan will have a few wobbles along the way when faced with new things (i.e. if things were to develop between Rose and Vanessa) but the message of ‘I love you no matter what’ will continue to reiterated. And it’s important that this is the message that is put out there for the audience. Of course the flip side of this will be the relationship between Vanessa and her mother and the lack of support Vanessa will receive. And it’s important that this side is told too, in the hope that parents out there will change their minds and see what damage they are doing to their children. It certainly wouldn’t be unrealistic for Vanessa to take an overdose with her struggling to deal with her sexuality and her receiving no support from her mother! (I view Rose as being the stronger of the two).

||Q:|Heading|font_size=20|| You said it yourself, Vanessa is a bit of an enigma. A lot of people don’t like her. But I suspect you’ve got some ideas about what’s going on inside her head and why she behaves the way she does. Care to share your insight into what you think is going on with her?
||A:|Heading|font_size=20|| We know that she has feelings for Rose….she wouldn’t have kissed her if she hadn’t. Whilst Rose in Series 1 has begun to accept her sexuality, Vanessa is still confused. This is not unusual, as we all reach acceptance at different times. From what Rose has said to Nathan about Vanessa’s mother, we know her not to be supportive and pretty strict. So at the moment, Vanessa is having to deal with the emotions raging inside of her, and knowing that she hasn’t the support of her mother. The battle for Vanessa will be as to whether she will follow her heart or buckle to the pressure from her mother.

||Q:|Heading|font_size=20|| Let’s learn a little bit more about you!  According to your Twitter profile you’re the owner of Mobile Dog Grooming. Tell us about it! How did you come to be a mobile-dog-grooming-entrepreneur?
||A:|Heading|font_size=20|| I’ve been in it for about 4 years now. Basically, I’m a Master Franchisee, so my job is to get people to purchase areas and set up their mobile dog grooming business in that area. We’ve 6 vehicles around the country so far. I’d previously worked abroad (London, Germany, Austria) in an office environment for nearly 20 years and I was looking for a change. Always liked animals and I liked the idea of a franchise business, so I initially purchased an area as a franchisee. And as they say, I ended up liking the business so much I bought the rights to the Master Franchise! In the good days, before our government and banks put us into huge debt for the next 10 years or so, it was a great business, but it’s certainly tough being self employed in the middle of a recession!

Thank you for taking the time to answer these questions Rita!  I can’t wait to share more Out With Dad with you.