Nicole Simone, aka: Miss Late July, the songstress, muscisan, blogger, social networker took some time to do some Questions & Answers with us. 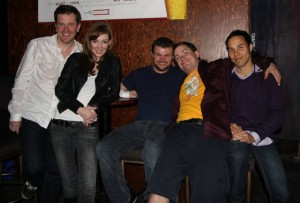 ||Q:|Heading|font_size=20|| Has your involvement influenced you?
||A:|Heading|font_size=20|| My involvement with OWD has been a really positive influence.  It’s certainly helped my music reach a new and broader audience.  Aside from that, seeing my music on film and used in such a unique context is really both honoring and inspiring.  I remember watching the scene where Side Swept was used, and I had a bit of a moment.  It was very cool.

||Q:|Heading|font_size=20|| I know you’re a strong believer in artist collaboration and mutual support.  Care to elaborate?  Why is it so important?
||A:|Heading|font_size=20|| Absolutely.  I believe everyone is creative and an artist in their own respect.  The only thing the prevents people from, well, being them true selves in the lack or support or negativity around them.  When a person takes the step to put out their own artwork, whether that be music, film, dance et cetera, it all flourishes when other people in creative fields recognize and collaborate. It’s the beautiful synergy that just builds and builds. Without true creative collaboration we would never be able to get very far as we do with our creative insights.

What’s it like to see/hear your work becoming a part of someone else’s project?
||A:|Heading|font_size=20|| It’s quite a feat for me to be apart of a project like this.  I was really excited when asked for my music to be included. When you actually see/hear it on film, it gave me a great feeling of accomplishment, and I dare say pride.  To see your songs used in different context and see it re-interpreted in such a wonderful way is truly a great feeling.

||Q:|Heading|font_size=20|| You’re an avid social networker.  Why?  What have you gained from it?
||A:|Heading|font_size=20|| I am. I feel it’s because I love meeting new people, staying in the loop and being apart of new experiences.  I think from a music aspect it’s definitely allowed my songs to reach a broader audience.  On the other side of it I’ve made some wonderful friends via social networking that constantly resonate in my everyday life. 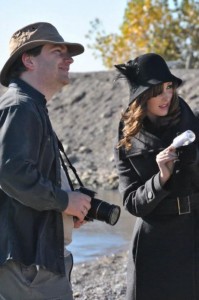 Jason & Nicole on set, filming her music video for "Side Swept", due out this December.

||Q:|Heading|font_size=20|| You’re working on a new album right now, with our shared music producer Adrian Ellis.  Can you give us any insight of what to expect?
||A:|Heading|font_size=20|| The new album is called “Hospital Quiet”.  It’s six tracks and they all have a very cinematic quality to them.  I was very concerned with creating arrangements that had a lot of movement and dynamic to them. It’s more of a downbeat album, I wanted to say almost sad but Ellis describes the album as ‘epic’ sounding. I like that description better.  It’s more along the lines of what “A Well Kept Secret” and “Side Swept” was on the last record.  It should be released in full by January 2011.

||Q:|Heading|font_size=20|| According to your Twitter feed, you’ve just completed filming the fifth and final music video for your first EP.  Who did you work with, and what was that experience like?
||A:|Heading|font_size=20||  I worked with you!!  Along with, producer Eric Taylor and Amanda Mitro.  It was a wonderful experience.  We filmed near the water here in Toronto, with a 1930’s vibe to the whole video.  It was great working with truly passionate people, whose end goal is to make something unique.  I loved working with all them and hope we can collaborate in the near future!