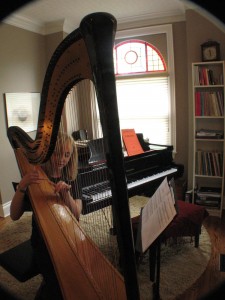 As we wanted to keep the production value as high as possible, I began thinking about using live players on the score early on.  I called on two musical friends to help out – long time co-raconteur and multi-instrumentalist Michael McGuffin, and Susan Vinovich on harp. 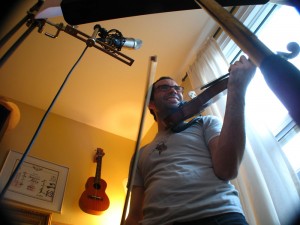 The harp is a very important element in the score as it speaks to Rose’s character, and Susan did an amazing job bringing it to life.  At just 15, she’s already racking up performance time playing in bands and studying piano as well as harp, but it’s a real test of nerves to play a new piece of music to a click track with finesse and feeling, and do it all while the composer is giving you orders from the sidelines!  Sticking to my guerrilla scoring tactics, I recorded her wonderful instrument (which served as the main harp for the National Arts Center Orchestra from ’67 – ’72) in her living room, using a simple digital recorder with two stereo mic pairs – one set focused on the instrument, and the other to capture a bit of the room ambience.  With such a simple setup, it all comes down to carefully considered placement of the mic. 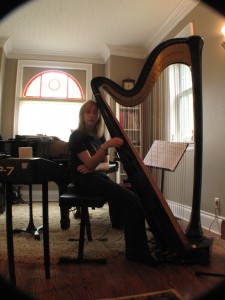 Most importantly, I got the music – it’s certainly not an example of a pristine recording.  In fact, if you listen VERY closely you can hear the cat scuffling around and someone doing the dishes in the background 🙂  Does it matter?  Absolutely not.  Susan’s delicate playing adds so much life to the score and lift the production immeasurably.

I employed a similar method in recording Michael’s string parts.  We’ve worked together on many projects, so he’s no stranger to the (mad) process where things get added, changed, or tossed on the fly as necessary.  I just showed up, threw my sheet music in front of him and demanded perfection 🙂  As Michael has a recording room the school he founded and teaches at (https://www.thecadencemusic.com/), I had a bit more flexibility and control in capturing the sound, but again, it really just comes down to hearing that ‘sweet spot’ and throwing the right mic in front of it!  It’s very exciting getting music you’ve written performed – it is both magical and terrifying.  There are always surprises, and you have to be in ‘Score Producer’ mode, guiding the process, coaching the musicians, listening for errors, and also trusting the process.   Sometimes wonderful and unexpected things happen, but if things aren’t working (and there’ll always be something!) you have to find a solution on the spot, and fast.  The process of recording a score puts a lot of pressure on all involved, but it’s a lot of fun. 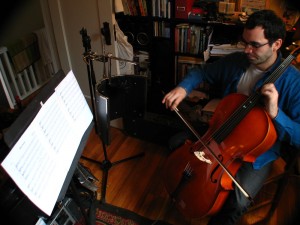 I’d like to extend a big thank you to both Susan and Michael for their time and their beautiful playing.  Thanks for reading and listening, and I hope you enjoy the first season of Out With Dad!