Okay, there wasn’t any blood.  But there was more than enough sweat to make up for it.  More on that later.  In the next few Making Out blogs I’m going to discuss what went into the making of “Party Out”

The most recent episode, “Party Out” was inspired from a number of sources.  Namely the music you hear, but also your feedback.  Trust me when I say this: I read everything you guys have to say about Out With Dad.

Feedback about Vanessa stood out to me, even though none of what you said terribly surprised me.  “What’s up with Vanessa?” is a common theme.  People don’t get her, and a lot of people don’t like her.  Why would someone like Rose like, let alone love, someone like Vanessa?

Vanessa has been the most challenging character to write. Even casting Vanessa was a challenge – because at the time, I still hadn’t quite figured out who she is.

Enter: Lindsey Middleton.  As with all the girls that came to audition, I had them read as both Rose and Vanessa.  I asked each actor which character they’d prefer to read as first; interestingly, she was the only one who choose Vanessa.  Now, let me be clear- casting Vanessa wasn’t a challenge because the actors who came out for her weren’t good enough.  In fact, it was the opposite.  There were terrific performers who auditioned and I remember them well (I hope to work with them one day).  It was a question of who ‘fit’ Vanessa, a character I didn’t really know all that well.  We did call-back auditions for the roll of Vanessa.  Kate Conway had already been cast as Rose, so she joined us to read with the candidates.  (Kate was a shoe-in for Rose, perhaps I’ll write about that another day.)  It boiled down to Lindsey’s chemistry with Kate.  They happened to go to the same school at different times, so they had an instant history together.  You could really feel it. That sense of history between Rose and Vanessa is very important.  After that, Lindsey made finding Vanessa a lot easier.  Through rehearsals and table reads, we’d discuss who she is, her family, her history and so on.  She and I have all that worked out.  However, just because Lindsey and I understand her well privately, publicly she gives off the wrong impression.  That’s one of the problems with a cold-open like our first episode.  We’re jumping in at an awkward moment. 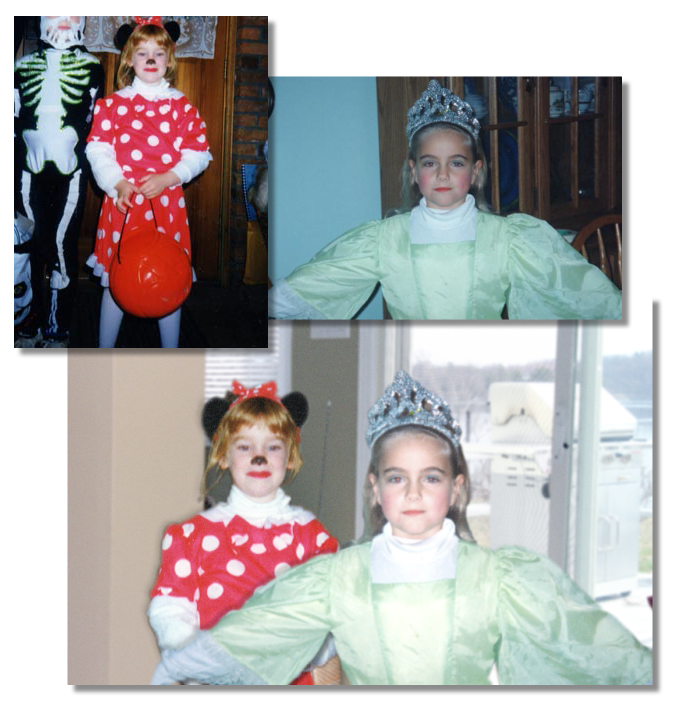 I totally undestand why people would be asking why the heck would someone like Rose fall for a person like Vanessa?  She seems like a real stick in the mud.  This very fact is what inspired the opening credits sequence with the cork board – I wanted to paint a history of Rose and Vanessa growing up together, all the good times. Kate and Lindsey gave me loads of photos of them growing up so could scan/Photoshop them together.  But alas, it’s only about 30 seconds of story telling.  I wasn’t enough to show how much they love each other.

||The golden rule in filmmaking: “show it, don’t say it”.|SmallType|||

Well, your feedback is proof this rule is true.  We’ve said it over and over how close these girls are, but it hasn’t been felt.  I needed to show it.  That is the motivation behind the recently conceived and filmed “Party Out”.  I need to show the world how much fun these girls really have together, especially when Vanessa lets loose.  I need to show them when they’re not all awkward.  A situation that’s not about being gay or being homophobic, or questioning who/what you or your best friend is.  It was also important to me to share that heartbreak – that pain we’ve all experienced one time or another when we see that special someone and the feelings aren’t returned.  For me and my friends, these events always seemed to unfold at basement parties that were always lit by multi-coloured lights (I’m thinking of your parties Juls!).

I was at a concert a while back.  Adrian Ellis was performing with a band at The Horseshoe Tavern on Queen West in Toronto.   Next to me were two girls making out to a very passionate song by Fjord Rowboat.  Of course I got to thinking about Rose and Vanessa, had images of them dancing.  All the lights in the world fade away and it’s just them – in their own private world.  I kept thinking about this image.

One day while on the transit, with my MP3 player on random, I heard the song “Steady Beating Drum” by Lara Martin.  I discovered her music through our art director Lizz Hodgson, a friend of Lara’s.  Lizz had given me “Steady Beating Drum” as a track that I could maybe use for a future episode (Lizz’s voice is among the backup vocals).  It doesn’t fit the scene for the final season one episode, but I like it.  On this occasion had a funny vision of Corey Lof as Kenny dancing ridiculously to it, and dragging in a reluctant Rose.  It seemed hilarious to me.  I met Lara a few days later at DramaWay’s DramaWorks 2010 production.  I told her about my vision, and asked her for permission to use her song in this episode… should I ever film it.

I’d already made a connection with Nicole Simone, aka Late July, her album producer is none-other than Adrian Ellis.  I’ve spoken with her about using another one of her songs for a future episode, to which she’d agreed.  I’ve also had the pleasure of seeing her perform live.  [Note to fans in the Toronto Area: Late July will be performing at Velvet Underground on September 18th, 2010]  This summer (in late July, I believe…)  she approached me about producing a music video for “Side Swept”

.  I’m flattered and excited because it’s already one of my favourite songs from her EP.  As I listened to the song carefully and read the lyrics, I couldn’t help but make connections to Rose and Vanessa.  I was supposed to be thinking about her music video… but I couldn’t help it.  While I had always planned on contacting Fjord Rowboat about using one of their songs for the scene… the connection between Rose & Vanessa’s situation and Side Swept seemed too great to ignore.  I threw out my script and started to re-write with “Side Swept” in mind.  Unrelated to Out With Dad, I sat down with Nicole to discuss her music video.  At that meeting I presented her with the script for “Party Out”

, which included her song – not just in passing, but her words embedded right into the story.  I was nervous, because it was a bold move.  But confident because I knew she was a fan of the show already.  I hoped she’d be flattered, and fortunately she was.  She gave me permission on the spot.

All that was left was asking Kate how she feels about crying on command.  “Bring it on!” I believe were her words.  Always enthusiastic.

The pieces were coming together.  The cast and crew were eager.  My aunt volunteered her basement as a filming location.  All we needed now was loads of Christmas lights and date to film it.

Next article will discuss the production day.