A (not so) Well Kept Secret

“Chemistry with Vanessa” was the first episode to secure permission from a musician to use their music – this was back in Late March. Friend and composer Adrian Ellis posted on his Facebook page a music video for a song he’d worked on as producer and musician. As soon as I heard it I knew I wanted it in Out With Dad. I promptly emailed Adrian: “I just listened to Late July’s A Well Kept Secret. It’s beautiful. Before I let my imagination run wild, how likely/possible do you think it is that I could use this song, or others by her in Out With Dad?” His prompt response: “I will check in w/ Ms.Late July – I think the odds are probably good.”

At that time the episode had the working title “Dreaming with Vanessa”. I was never fond of that title – but what do you call an episode that was only two scenes: Rose’s dream and the lockerbay with Kenny and Vanessa? The study and the stairway scenes hadn’t been filmed. 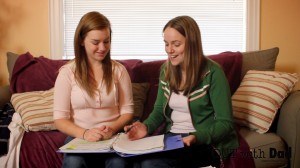 Actually, we shot a chemistry study scene back in April. It was a short single-shot scene that was about 30 seconds long – without seeing Vanessa’s mother’s face. It was to be included in the then-titled episode “Out on Study Dates” – which became “Blind Date with Nathan”. I’ll write more about this scene and the reshoot in a future blog.

Back when Adrian and I were doing our spotting session for the music, I played the dream sequence for him with “A Well Kept Secret” roughed in. I still remember the look on his face when he watched it. He was very impressed. “It’s as if this scene informs the meaning of the lyrics. I think Nicole is going to be so happy to see this” (paraphrasing).

I showed Nicole (a.k.a. Late July) a rough cut of the dream with her music when I met with her for a meeting regarding the music video we’re producing together (for her song Side Swept, featured in “Party Out“). She was very excited. Since I first approached Late July about using her music, she has become one of our biggest supporters. She tweets & re-tweets, Facebook posts and blogs about us regularly. I’d like to invite you to “Like” the Late July Facebook page and follow her on Twitter.

This is the music video Adrian posted in late March that grabbed my attention, thus beginning an amazing and inspiring relationship.