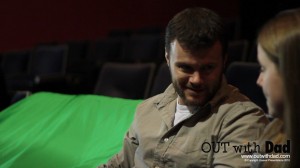 I’ll be honest, the theatre scene scared the @#%* out of me when I read the script. Not so much because there was a lot of dialogue to remember, but because I had to play both Nathan AND his subconscious…

We officially started shooting “Out With Dad” this past Saturday, April 10. The last time I had been on any sort of production set was last September when I was in another of Jason Leaver’s intriguing projects called Mobius. I arrived late in the afternoon on Saturday, as the scene I was in took place in the evening hours. When I arrived, as with Mobius, the set was busy with people determined to put on film a story that would feed your mind and captivate your being – and look good too! However, unlike Mobius, the cast and crew were largely expanded. Each person with a job to do and inspired to do that job to perfection and at the helm steering the “Out With Dad” ship was Jason Leaver.