||Hi! I am curious how you were able to fund the project? The production value of OWD is quite high and I am wondering if you “broke the bank” to create this series?|SubTitle|||

Firstly, thank you for the compliment.  We pride our attention to detail and efforts to make the production value appear as high as possible.

I’ve often referred to Out With Dad as my expensive hobby. While we didn’t exactly break the bank making it, funding was mostly out of the pocket of the creator/writer/director, that’s me, Jason Leaver. Fortunately, otherpeople have been very generous.  For instance, the entire cast and crew volunteered their time and talent to bring Out With Dad to life.  Beyond that, there are other expenses that everyone contributed to.  Such as the cast and crew paying their own way with travel (some cast members had to travel quite far to get to set).  Or the time people took off work to be there.  It also cost us a lot of sleep!  In terms of expenses, the largest portion of our budget was catering.  If there’s one thing I learned in film school is that feeding your cast and crew is of the utmost importance.  When you think of it – this is effectively our labour costs when you consider the fact that everyone volunteered their time.  The least we could do is feed them.

Other big costs includes the equipment.  But we were lucky there too, in that most of the equipment was lent to us.  This includes equipment that I personally bought specifically with the  production in mind, but I’m keeping for myself for use with my own business (a video production company).

Next season we have bigger dreams.  We want to film at more ambitious locations, which will definitely cost us.  We’d like to shoot with better cameras and better audio equipment.  We also want to include more people in the production which are normally common-place on a production but we skipped because of budget, such as a hair and makeup, wardrobe and others.  We also have to concern ourselves with legal and copyright concerns.  Submitting Out With Dad to various film and web award festivals is important, and there are often entry and/or shipping fees to consider.  Should we win any awards, the recognition would really help us spread the word of Out With Dad to more people around the world and may impress potential sponsors.

There’s a lot ahead of us before the cameras roll again.  Concurrently with the writing of season two, we’re also seeking sponsorship.  We have some optimistic leads, but nothing certain.  Maybe we’ll get lucky.  You can help us too, as many have! 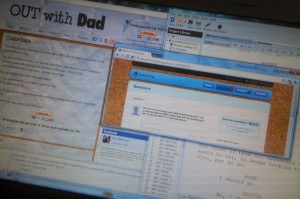 Out With Dad has received donations via our PayPal account from people all around the world.  It’s so touching!  The first was from Hong Kong the day after the first episode premiered.  Since then, folks from all over have contributed; many from the US, Germany and Canada too.  The most recent was from England.  Every little bit will help, each dollar brings us another step closer to making more Out With Dad.

Coming soon is an exciting way you can help: we will be releasing Out With Dad on DVD and Bluray very soon!  I’m sorry I missed Christmas this season – but it’ll be soon, I promise!  All the revenue from those sales will go directly towards the next season.

Another way you can help is even easier: by just sharing the show with people.  Those annoying ads on our YouTube channel and on our website are actually help us out.  The more people that watch Out With Dad = more potential revenue.  Any amount we earn will go directly towards the next season.

We’re so thankful for your help.  We jump for joy every time we get a donation, someone volunteers to help translate into another language, every comment we get here, on YouTube or elsewhere, someone posts a link to us or embeds the show on their blog or site.  It feels great.  It really does!

Ask the cast & crew of Out With Dad anything!