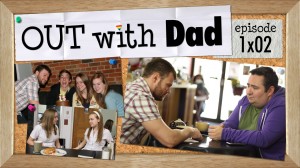 Writer/creator Jason Leaver looks back at our second episode of the first season, “Out to Lunch”:

||“|Heading|||Episode two went through a lot of changes. Originally it was going to be school cafeteria scenes for our trio of Rose, Kenny and Vanessa. But we couldn’t find a suitable location to film in. So we modified the script to take place in a local diner instead.  Which, by the way, was not a diner at all, but an office.  It was transformed through the brilliant art direction by our very own Lizz Hodgson. We called it “Liz’z Diner”, and onset illustrator/crew member Brendon Smith wrote out Liz’z menu on the chalkboard in the background. The other big change with the length. Originally “Out to Lunch” was only to be Rose with Kenny/Vanessa and Nathan at the coffee shoppe with Johnny. But after the OVERWHELMING reaction to episode one being so short, we decided to shoot more to make it longer. The scene of Nathan researching online was originally written for a season two episode. Kate, Will and Mark Devine (the owner of the home we film in) agreed to shoot that scene very last minute. Just in time for the episode’s release, on July 22, 2010.

I wrote about filming that scene for the Making Out blog last year. (click to read)

The scene with Johnny turned out to be even more important than I ever realized. For one, it really sold the audience on what kind of father Nathan is. Two, it caught the attention of PFLAG Canada (more on that later). Also, it directly sets up scenes in episodes mid-way in season two.||”|Heading|||