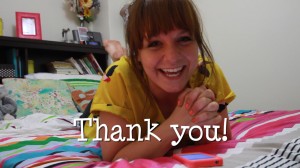 WOW! The fundraising campaign is going even better than ever! Last night I posted Lindsey & Kate’s thank you message, and the donations haven’t slowed down a bit. In fact, since then, there has already been another dozen donors. It would seem our fundraising campaign is working! I think, at the rate we’re going, I’ll be able to start editing the first episode as early as next week.